The Guide to Finding People In The UK From Your Armchair

You may want to track someone down for all sorts of reasons. Finding people in the UK can seem like an impossible task, but with our advice and experience you’ll know where to start looking…

How to Find People

While it’s true that it isn’t against the law to change your name (as long as you don’t steal someone else’s) and nor is it illegal to desert your family or walk away from your business, the police do now work a lot harder than once they did to find people who have vanished but are not wanted for a criminal offence. (They’ve always worked very hard – and still do – to find missing children and young people. And rightly so). And there are organisations like the charity, Missing People, that strive to restore contact between the vanished and those they left behind. The scale of the task of finding people becomes clear when you know that particular organisation takes a whopping 10,000 calls a month regarding missing people.

Disappearing without trace is possible – but it takes a lot of planning and a certain amount of luck. But is it really possible to vanish and never be found? Well – that rather depends on who is looking for you.

John lives in a remote part of Shropshire, close to the Welsh border. His eldest son, who is now 44, climbed out of his bedroom window when he was a 17 year old college student (he never completed the course) and his family would occasionally see him in town, sleeping rough. He’d accept money, but he wasn’t interested in returning. He moved far away – to another continent at one time – but recently John discovered by chance that an old school friend was in occasional contact on Facebook. ‘I take a peek at his Facebook page myself from time to time, now that I know where it is, so I know he’s still alive. He doesn’t want to be in touch, and that’s his right. In any case, lawyers have written to me trying to recover money he owes their clients; when they ask if I know where he is, I say I don’t and I couldn’t do that if it wasn’t true. Sooner or later, though, we’ll need to get a message to him saying there’s a funeral he might want to attend and I know his Facebook friend could arrange that for me.

But if John did want to locate his son, could he do it?

How? By taking advice from a process server. Finding People in the UK

Process servers are people who usually do all sorts of other investigative work, too. When a client issues a writ against someone, or for other reasons wants a court paper or other document delivered and doesn’t want the person it’s delivered to to be able to deny receiving it, they use a process server. Sometimes the first job the process server has to do is finding people. And sometimes, that person doesn’t want to be found. Process servers have developed a number of techniques to finding people who’d prefer to remain hidden.

The first advice is to start with what you know. Get all the information you can – name (and that’s full name), date and place of birth, any previous address you can get hold of, school(s), college(s), jobs the person has done, skills and interests. Anything else? Brainstorm it. Any sporting history? As a fan or a player? Awards received, courtroom bother, siblings’ names, girls/boys they ever went out with, music they had a passion for? Write it all down.

Before you get your private dick’s trench coat on, there’s an awful lot you can do sitting at your laptop with a cup of your preferred hot beverage and a chocolate digestive close at hand. Many process servers will tell you that, with the amount of information that’s now online, they don’t need to leave the office until they know exactly where they’re going to serve the document they’re holding.

Facebook is a very good starting point for a process server in the business of finding people. It has more than a billion subscribers. If you think of that as Facebook’s “population,” this is how the biggest countries in the world line up, population-wise:

That’s right – by population, Facebook is the third largest “country” in the world. It should be obvious that anyone who doesn’t want to be found shouldn’t be on Facebook – but, it seems that it is not, because process servers report a good success rate with the site. We live in a time when people yearn to be known – reality TV would not be so popular, otherwise – and the desire to stay out of sight can be outvoted by the wish for people to see their cat videos or learn that they were in the crowd when Manchester City beat Chelsea.

Finding people on Facebook won’t necessarily, of itself, tell you where they are. But Facebook Messenger may.

Marauder’s Map was originally part of JK Rowling’s fictional Harry Potter world. It still is – but the name was used for an app that ran on the Chrome browser and tracked people’s location through Facebook Messenger, showing it on an on-screen map like this: 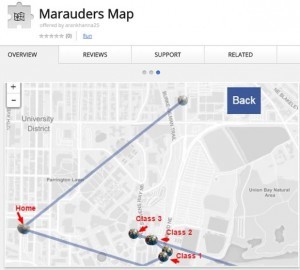 When the implications of this app were understood, there were so many protests it was withdrawn, and Facebook disabled the hook that made it work – but Facebook Messenger is still a useful tool because, unless the user has turned it not to (and most people don’t know they can do that), it records where the user is. If someone uses a smartphone and runs Messenger on it, that person’s location is not only stored – it’s transmitted to anyone else with Messenger on a smartphone who is a Facebook friend and happens to be somewhere near.

(But take care, because not every “I was there” statement on Facebook is 100% reliable. The number of Irishmen who were at Soldier Field in Chicago to see Ireland’s rugby union team beat the All Blacks is already over 3 million – and the ground holds 61,500).

What other people do they mention? Have they posted any recent(ish) photographs of themselves with someone else? Is that person tagged in the pic? That means you know who they are – can you find some reason to ask if they happen to know where X is right now?

Check out their status updates. They often say something about what they’re doing, who they’re doing it with, and where.

Finding People with An IP Address

It’s also possible (though not straightforward – you have to get into a “Chat” and run a program called NetStat in a command window while you’re doing it, so a little technical awareness is called for) to find someone’s IP address on Facebook. The IP address is what the Internet uses to deliver emails and, indeed, to hook anyone up, much as the Post Office uses your post code and street address to deliver snail mail; if you have it, you can find out where the computer, tablet or smartphone is – or, more strictly, where it was when it last connected. You do that by typing the IP address into Whatismyipaddress.com or a similar service – Google will show you where they are geographically. And that brings us to:

If you can find an email the person you’re looking for has sent, take a look at the full message header, because it will contain (among an awful lot of other stuff that won’t interest you at all) the sender’s IP Address, which you then search as in the previous paragraph. Whatever email reader you use has the ability to show you the full message header – in Outlook 2010 and 2013, for example, you double click the message in question, then click <Tags> and then select <Internet Headers>. 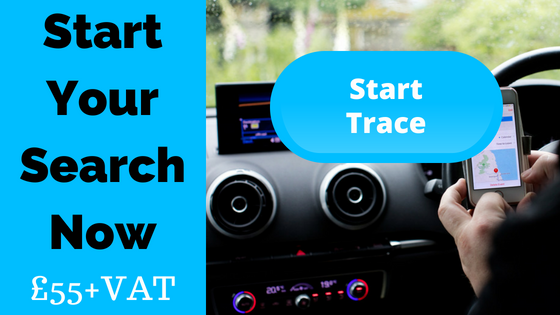 Other things to check out

Other online sources that may well lead you to the person you want to find include:
The electoral role – an obvious one, where the individual may be registered to vote
Companies House – if the person is a company director or company secretary, they’ll be listed there
Experian – to check any past CCJ details against an individual, for example
The Land Registry – find out who owns a piece of land or property

One final thing you must do, though, is a Google Search – if the person you’re looking for is on LinkedIn, Pinterest, or a whole stack of other social media sites, Google will know they’re there and they’ll tell you.